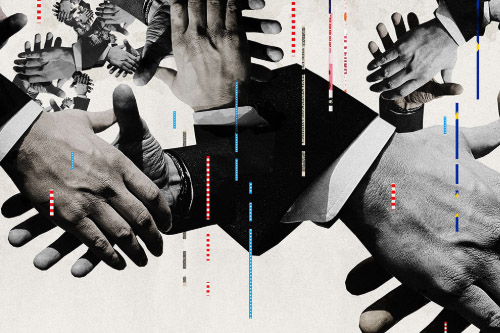 In the previous two articles I explained how an economy can eventually totally collapse when corrupt politicians are at the helm. But is there any cause for optimism? Can countries shrug off corruption and recover their economies? This article maps a path to economic and moral regeneration.

History has shown that countries can pull themselves out of this pit of this misery, but it takes political will and dogged determination to reverse the economic slide. Often the powers that be are reluctant to want to change as their personal economic fortunes are embroiled in the political office and the loss of the one could mean the loss of the other. Evidence of this remarkable recovery can be found in countries like Argentina, Portugal, Kenya, Rwanda and Spain, who despite seeing out-of-control inflation, institutionalized corruption and political nepotism managed to navigate their way clear and to some measure managed to reinstitute the rule of law and sound economic policies and practices.

The absolute key ingredient is political will. Without the buy-in and active support of the person in charge there will be no change to the corruption, poverty and misery. Politicians need to understand that corruption hurts the poor far worse than the rich. By way of example, a rich man and a poor man are trying to obtain their driving license to become Uber drivers. The licensing official, who is corrupt, will extract the bribe from the rich man and issue him with his license. This allows the person who has means, to further enrich himself by carrying out his desired trade. The poor man, who cannot afford to bribe the official, will thus not be issued with a license and will remain unemployed and by definition – poor.

It always seems so curious to me, that Julius Malema who is corrupt to the core yet loudly proclaims that he fights for the poor. What he does not care to elaborate to his supporters is that his susceptibility to corruption is the very reason so many of his supporters remain poor.

In all countries where their leaders have either managed to climb out or are busily climbing out of the grip of poverty, they all have one commonality, namely an anti-corruption stance. They all spend time and efforts to sharpen the teeth of the very watchdog who should ensure that corrupt activities are kept under control. In some places like Columbia they received a certain measure of assistance from the USA. One needs to be cognizant of the fact that the USA provided the assistance to stem the drug trade emanating from the region. I digress, the point is that the corner stone of economic prosperity is holding politicians and government officials to account.

This is easier said than done. Remember that those corrupt people have a lot to lose. Not only can their ill-gotten gains be taken away from them, but their very liberty may be at stake. These are very motivating reasons why corrupt officials do not want to see a change in the status quo.

They use a concerted methodology of keeping them in power when the political winds have shifted in direction. On 30 June 2020 the ANC, under the influence of the Secretary General, Ace Magashule and deputy Secretary General, Jesse Duarte forced the re instatement of Danny Msiza and Florence Radzilani after they were exposed in Adv. Terry Motau’s report on the VBS bank heist. This after much dissention in the ranks of the ANC, including that of President Ramaphosa. Ace Magashule was also very influential in the appointment of Geoff Makhubo as mayor of Johannesburg. This presumably to utilize the economic value contained in the city’s coffers to purchase as much political goodwill that is available.

Unfortunately, the turnaround of the prosecutorial and policing structures is not simple and quick. Any successful turnaround strategy involves at least four of the five phases that are typically encountered when an organization is successfully transformed into a healthy and successful entity.

A turnaround strategy is a difficult and complex process where an organization is often fraught with internal fighting, personal agendas, and boardroom politics. Nevertheless, it ordinarily begins with a change at the top. Either the top person is replaced or has a huge change of heart. I personally am not a believer in epiphanies, so in my book a change in the President / CEO / Director General is what is required.

I am going to briefly describe the normal successful turnaround strategy in the expected five phases using an illustration of a bus company.

The new Managing Director is appointed. This is known as the “Euphoric” phase. Stakeholders expect much from the new MD. He lays down his Key Performance Indicators and maps out a strategy he believes will achieve his objectives. So, let say our MD sets his first KPI as 95 % of all buses will reach each and every stop along the way at the exact time as advertised. To achieve this objective, he must have an adequate number of reliable buses driven by motivated and focused drivers. The strategy must provide sufficient reliable buses, which are available to meet his key KPI. Workshops must be analyzed, and programs designed to maximize resources to ensure that buses are timeously and properly serviced. Where additional buses are required finance must be sought from either the owners or providers of outside capital. During this euphoric phase, the MD will typically replace – as I said earlier, I don’t believe in epiphanies – the directors responsible for finance, human resources, maintenance and any other applicable position. These newly appointed directors buy into the vision as proposed by the MD.

There tends to be a sense of euphoria among the stakeholders of the company. The passengers are upbeat as they believe that the stated KPI’s will help their scheduling, the suppliers are upbeat as they believe that payments will be timeous and accurate, etc. The customers satisfaction remains low as many stakeholders, although more optimistic, are still not satisfied with the late arrival of buses.

The next phase is considered the “Change Phase” This is typically where the newly appointed directors in charge of their various departments look within the departments and they in turn make changes. Our Director responsible for maintenance will, for example, find that the workshops are poorly run. The foreman is off two days a week. The other mechanics arrive late and leave early. Abuse of the company tools is commonplace. The result is that that workshops take far too long to effect repairs and shoddy workmanship is the order of the day. These are all things that require “Change”. Naturally, the staff morale will remain low and could result in some form of sabotage to undermine the new management structures. One would expect to find a slight improvement in the KPI yet the Customer Satisfaction would ordinarily remain low.

Then comes the “Disappointment” phase. The changes made earlier are starting to take hold and there would often be improvements in many off the support structures, but it may not always translate into achieving the set KPI’s. The workshops are servicing the vehicles faster and the quality of the workmanship is improving, which translates into more busses being available for use. However, there remains a shortage which, from time to time, means that busses are later than planned. During this phase you tend to find an improvement KPI, strategies start to bear fruit and even esprit de corps among the staff starts to improve.

In many turnarounds the organization only achieves the “Acceptance” phase. Here one tends to find that the KPI is largely met with a happy and content work force. The customers satisfaction improves dramatically and so too does the economic fortunes of the enterprise. Our passengers now begin to believe that they can catch the 08h30 to town and reasonably and reliably reach the city center by 09h15 as advertised. The busses are clean and pleasant to ride in. The drivers are friendly and helpful and the whole perception of the company and its busses are viewed differently by the stakeholders.

The last phase is “Buy-in Phase” This is where your stakeholders have complete faith in the entire organization. A very good example would be British mail. You can ask any Brit and he will proudly tell you that if you post an article today before 10h00 it will be at its destination by 10h00 the following day. Now it’s unreasonable to think that the millions of articles of post that the British Mail delivers on a daily basis that every single item arrives at its intended destination with in the allotted 24 hours. There must be some items that fail but the overwhelming majority of its mail is delivered according to its own KPI. Hence the buy-in from the stakeholders.

If I look at South Africa today, I believe we are probably somewhere in the disappointment phase. We had the time of “Ramaphoria” which lead to a shake up in the cabinet. That translated in changes at the top at the Police, National Directorate of Public Prosecutions and the South African Revenue Services. The KPI’s are being partially met in that the VBS boys, BOSASA (Gavin would have been arrested had he not met his unexpected demise) and a Lieutenant General of the police working in the supply chain has been arrested. So, it is clear that the change has taken, or at least partially taken, place and the forces have been moving to stop, arrest and prosecute the corruptors. The likes of Ace Magashule and David Mabuza are certainly attempting to stop or at the very least slow down the process. The Stakeholders – that is you and I Joe citizen – are not satisfied, we are disappointed as we would love to see Zuma, Gupta’s, Gumede and likes all serving long sentences. So, until we move into the acceptance phase I don’t see the economy moving or growing with any significance.

The good news is that at least it appears that South Africa is in a turnaround phase, which is starting to bear fruit, albeit not swiftly enough for the painful consequences of a corrupt legacy to be ameliorated soon.

One thought on “When a Corrupt Economy Changes”